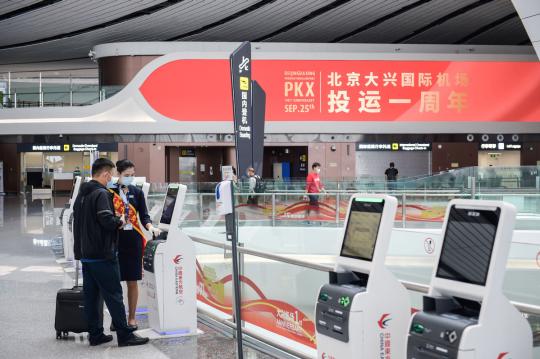 A staff worker assists a passenger to check in at Beijing Daxing International Airport, on Sept 25, 2020, also the airport’s first anniversary. [Photo/Xinhua]

The new Beijing Daxing International Airport, which is weathering the tough blow brought on by the COVID-19 pandemic earlier this year, marked its first anniversary on Friday with total annual passenger throughput exceeding 10 million.

“Daxing airport has handled some 84,000 takeoffs and landings since it began operating on Sept 25 last year, along with 10.23 million passenger trips and 40,000 metric tons of cargo,” Yao Yabo, general manager of Beijing Daxing International Airport, said at a news conference.

At its busiest, the airport handled over 660 flights a day in September, with daily passenger flow peaking at 92,000, he added.

The figure comes as domestic air travel in China is seeing a vibrant recovery amid effective epidemic control. Over 45.3 million domestic passenger trips were made last month, recovering to more than 80 percent of the level during the same period last year, according to the Civil Aviation Administration of China.

The robust growth in passenger volume of Daxing airport is also facilitated by multiplying flights, from about 200 flights per day during initial operations to about 650 daily flights currently, as airlines have been transferring flight operations from Beijing Capital International Airport, he said.

Han Wensheng, deputy Party secretary of China Southern Airlines, said the company has so far transferred 80 percent of its flights in Beijing to Daxing airport and is expected to move all of its flights by the end of next month.

In the long run, the carrier is estimated to operate more than 200 planes at the airport and handle 28.8 million passenger trips annually by 2025, he added.

Feng Dehua, deputy general manager of China Eastern Airlines, noted that the carrier has also moved 87 percent of the flights to the airport and operated 280 flights per day, accounting for more than 40 percent of flights at the airport.

To date, 26 domestic and overseas carriers operate from the airport, including Air China, China United Airlines and Xiamen Air, as well as British Airways and Finnair. There are 202 passenger routes connecting to 143 destinations globally operating from Daxing, as well as five cargo routes.

Daxing airport is now bracing for surging passenger traffic, as some 750,000 air trips are expected to be made during the coming eight-day National Day holiday, with about 95,000 trips to be made on a daily basis, according to the airport.

Located 46 kilometers south of downtown Beijing, the new aviation hub is expected to handle 45 million passenger trips a year by 2022 and 72 million by 2025, taking pressure off the Beijing Capital International Airport.